A moment of inattention

After a couple of days of rain, today was bright and clear and warm in the 60s. With Erin and the girls off to mass, Oliver and I drove a couple of miles up the road to the Duke Forest. I pulled off Old NC 86 and felt the soft ground and quickly felt the front tires sliding and spinning. Stuck. Nothing to do but go for our hike and hope for the best.

We strolled up the path until we found the stream, where Oliver pretended to fish. Woodpeckers occasionally sounded above. Nothing else mattered. 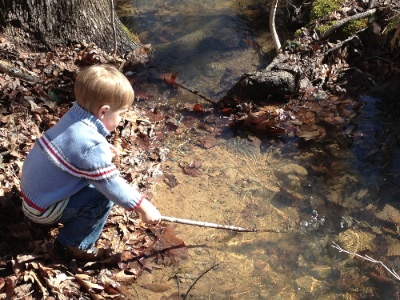 Back down the path, and just as we returned to the road, another car pulled up to the trailhead, asking if they should park across the street. “I don’t advise it,” I said. “In fact, I’m hoping you’ll give me a push, because I’m stuck in the mud.” A push later, Oliver and I were headed home.

Later, I dropped Malia at a friend’s home, and continued to another Duke Forest trailhead. Still a glorious day, and I felt alive and well running down the gravel of Concrete Bridge Road. The river was high over the concrete bridge, so I couldn’t cross; instead, I ran along the river on the single-track trail, hopping over rocks and tree roots, stopping at a high wall of stone to lean against the rock, listen to the river, feel the sun on my face.

Running back, I was almost back to the gravel road when, out of the corner of my eye, I spied a couple basking in the sun (clothed) across the river. I kept running, but my brain was still processing the sight, maybe recalling a similar scene with me and Erin on the rocks of ‘Ohe’o Gulch on Maui (a passionate trip), and at that moment, I lost my attention to the path, I tripped, and I was sprawled on the ground.

My left leg is banged up, and I’m sore and achy. But overall, a pleasant day.