I stood at the edge of Haiti in May, but I came back. Why? I ask myself now.

It was May 14, a blazing hot morning in the Dominican border town Dajabón. Dad and Dot and I were staying 30 kilometers away in the crossroads town of Santiago de la Cruz, the site where Dad lived as a 23-year-old Peace Corps Volunteer in 1963. His homecoming was nothing short of spectacular, marked by near-constant fellowship with old friends or their children, drawn, like moths to a flame, to the picture albums he’d spent the last year creating in his Honolulu office. One photo in those albums more than any other would elicit a collective, ethereal recognition: “Ah, Poecha,” they sigh, and for good reason. This photo of an innocent teenager in a blue dress is just heavenly, and while Dad, backed by our Dominican hosts Victoria and Linda, daughters of Teofila, the school teacher who nurtured the young PCV Joe, claims there was nothing between them, it’s obvious this beautiful young woman inspired my father’s stay in Santiago d.l. Cruz. (Regular readers of The Coconut Wireless might remember how I captured my own, similar, inspiration.) 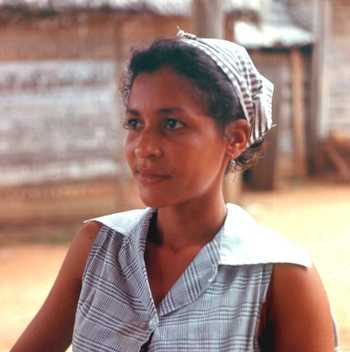 We’d driven to Dajabón in this morning to shop at the street market that sets up three times a week. It seemed as if Dad was the tallest person in the country at the moment, and even though he was clearly visible above the throngs crowding the streets, I was nervous that I’d lose sight of him. All week, Linda and Victoria had warned us that Dajabón was filled with brazen thieves and crafty pickpockets: Haitians. We’d heard various complaints or slurs against the Haitians—they smell because they don’t bathe, each man has many women who have many children—and yet Victoria treated her Haitian housegirl, Magali, well and Linda told us she admired how the Haitians worked so hard, harder than the Dominicans who it seemed to me to love speeding up and down the country’s roads on their unbelievably loud motorbikes. It takes no effort now to close my eyes and hear the noise of the Dominican Republic, the blaring merengue music from any and every bar (where you can get the coldest beer in the world -”El Presidente, por favor”), the honk of a passing lorry packed with cabbage, the harangue of the political parties deploring Dominicans to vote for Leonel or Hipólito in the national election that week.

But my memories of that day in Dajabón are silent. Mostly.

I’ve traveled around the world, and no matter where I go, even if it’s to the supermarket to buy milk, I’ve always got a backpack filled with notebooks and pens and a camera and a New Yorker and Swiss Army knife. I’ve never been robbed, never been mugged, but on this day my fears got the best of me, and I left my camera and my pack in the trunk of the rental car, which we parked behind a giant pile of bananas in front of a store owned by some relatives of Victoria. Even with the promised pair of eyes to watch the car, I wondered if it would be burglared as soon as we turned the corner.

We walked toward the border, and the streets suddenly were crowded with hurrying Haitians, every one moving swiftly, each person gently pushing another in a web of touch. I’ve been in similarly packed crowds of Americans, jammed so tight we couldn’t move in the aisles of a ballpark or among the streets of Cleveland’s Flats during the once-popular RiverFest, and yet abhorrent of any physical touch. The American crowds singly slothed home to their comforts. The Haitians hustled in their orchestrated pack like a darting school of fish because their lives depended on how often they could get into Dajabón, load up with 50-kilo sacks of beans or mountains of styrofoam to-go containers, return to the depots on the other side, collect a penny or two, and get back again. I hesitated – no, I froze – when Linda marched Dad through the Dominican border gate and onto the bridge over the Massacre River. “This is stupid,” I said to Dot, who stayed with me. “We don’t even have our passports. What happens if we get stuck on the other side?” Linda was insistent that it was fine for us to stand on the bridge, and she coaxed us out. She was right. The Haitians could have cared less, and the Dominican army sentries were too busy beating the few foot-traffic-stopping carts with their sticks – the only sound I can recall from that day. I looked over the bridge to see a young boy wading in the river, a quick hand gesture to ask me for a peso or two for the delivery of a smile. I’ll forever rue my lack of action, my inability to turn my back on the river but slip a coin or two over the rail to tell the boy I care, I do care.

I kept my coins in my pocket and walked back into the market, where I buy a passionfruit, a soursop, a pineapple (5 pesos, 10 pesos, 15 pesos), a straw bowler hat and a reed baseball hat (1400 pesos, 700 pesos – 45 pesos equal US$1), a cold Pepsi-Cola (60 pesos), a painted fish carving for Anna (100 pesos) and a painted metal sun for Erin (200 pesos). I still have thousands of pesos in my pocket and back in the car, some which I’ll use back in the capital, Santo Domingo, to buy a Haitian painting that reminds me of the women in the Dajabón market.

The car is just fine. As we drive away, Dot asks Linda if there’s a solution to Haiti’s poverty. “Si hay reforestacion, hay lluvia. Si hay lluvia, hay la vida.” (If there’s reforestation, there will be rain. If there’s rain, there will be life.) This is the same message I read about in Mountains Beyond Mountains, something I heard again last night when Paul Farmer and Tracy Kidder spoke in Chapel Hill about the book and about Farmer’s work in Haiti. Just two percent of the trees are left in Haiti, and erosion is horrendous – a week after I leave the Dominican Republic, heavy rains cause landslides that kill 1700 people on the border in the south. Farmer tells us about the hospital compound he’s built in the central plateau of Haiti, and this compound is filled with trees. “It’s filled with trees because we give the people jobs, and because they have jobs they don’t have to cut down trees to make charcoal to sell in Port-au-Prince to get money to buy food and send their kids to school,” he says.

Farmer is notorious for his well-founded criticisms of U.S. policy toward Haiti, a country we’ve occupied in the 1920s and more recently supported brutal dictatorships. “I’ve lost faith in the ability of the powerful to worry about those who are fragile,” he says softly yet passionately to a Baptist church filled with the caring of Chapel Hill. “When I come back to the States from Haiti, I meet people like you and I can’t understand why our policy toward Haiti is what it is.” George Bush and John Kerry are at that very moment debating the finer points of fighting for phantom democracy half a world away.

So why this rain of words onto my ephemeral blog? Because NPR’s Daniel Zwerdling got choked up in front of me today. Zwerdling was a panelist at the Journalism & Trauma seminar today, and he seered an image into our minds, his white-hot memory of stepping into a refugee camp tent in famine-scorched Mogadishu in the 1980s. A lifeless mother was sprawled near her near-dead naked son, whose butt crack was swarming with hundreds of flies. “The father looked at me with these eyes … with the look of I’m going to die soon.”

The seminar ended with a screening of Dying To Tell A Story, a documentary about war photographer Dan Eldon. He was just 22 when he was killed in Somalia in 1993, and his sister and mother made a powerful film about war correspondents and the dangers they face to capture war in all its human crushing.

All in all, an intense two days that leave me reeling – I was there on the bridge, on the edge of a poverty and hunger calling for my attention, and I stepped back to buy my favorite fruits. If only my river of words could make some tiny difference.
—————-

I didn’t take pictures in Dajabón, but here are pictures of the market and border crossing from someone at Duke University.