Sometime just before Christmas, I gave up. I stopped trying to be a web designer.

Back in early 2000, when I was just back from Peace Corps service in the Republic of Vanuatu, I got a job working at an Internet startup company called PlanetKnowHow, southeast of Cleveland. As I surfed the World Wide Web each day looking for how-to content, I listed in a spiral stenographer’s notebook any cool websites and handy tools I’d encountered — my first entry, which my friend, Karyn, will appreciate, was for (the now defunct) octopus.com, with the note “interesting way to customize web content.” My early online explorations helped me to start a family website called Zuiker Chronicles Online (more history here). Ever since, I’ve been blogging and tinkering with code.

I considered my self-administered web life as mental exercises, but also as a continuation of the Peace Corps tradition of learning a new language, or two. (In Vanuatu, I’d learned Bislama, a pidgin language used among the 82 islands with their 113 distinct languages.) I designed the current themes at zuiker.com and mistersugar.com, but that was back in 2006. As the years passed, and Web design trends showed a lot of creativity and new functions, I filled more notebooks with wireframe sketches and theme inspirations. I especially liked the back-to-basics, simple designs for blogs, often just a single column of text. As I noted last summer, I had begun to dabble with Foundation and Bootstrap.

The holidays approached, and I thought I’d have down time to develop my site. Still, I was starting to recognize that my developing style was as inefficient as it could be, what with the way I introduced design elements one at a time. A new year was coming, in which I intend to shift my focus back to my priorities: health, family, work, service. I finally told myself that while tinkering with code was a nice avocation, my time is valuable, and I was wasting it.

I turned for advice to my brilliant friend, Beck Tench. We met for a beer and duck frites at Bull City Burger and Brewery, a Friday evening crowd filling up the place around us. Beck told of her trip to Salzburg and contemplations on her future work. I showed her my design inspirations, talked about the simplicity of single-column text in a responsive design, and expressed my hopes for finding a designer to give me a similarly anodyne-but-crisp style.

Beck listened. I explained that I regularly use the search function to mine my 13 years of blogging, and often find essays and anecdotes I’d forgotten I’d ever shared. My style, I said, is one of storyblogging: recounting a current event, relating it to a story of my or my family’s past, and making an observation.

“A blog is a frequently updated website, with short posts displayed in a reverse chronological order,” I said. I knew she’d heard my blogging 101 spiel plenty of times before.

What if my blog, after 13 years of writing and referencing and layering, is less about chronology and more about themes, she suggested. What if mistersugar were to be designed around these connections and continuations, listing not just the latest posts but also displaying the threads between multiple items? And something more than the “If you liked this post, you’ll like these” plugins that some blogs use.

I found this fascinating, and liberating. In recent months, I knew that I was floundering in my web designing because I was fixated on simplicity. I’d been trying to force my blog — myself, even — into an envelope that just didn’t reflect the contours of my life and writing.

Then, the New Yorker arrived with an essay by John McPhee on choosing the right structure for his narrative reporting projects: chronology versus theme. Just what Beck and I had explored a few days earlier.

Beck suggested searching far and wide for a developer who would dig into my archives to understand my blogging history, and maybe help me customize the content management system (I use Textpattern) to help me see the connections and present the threaded stories. I imagine I could show those threads and connections with embedded Storify or Prezi-like presentations, and I may try to prepare at least one to see if there’s a there there: I think my blogging and writing is interesting, maybe only because it’s been the way I write my life’s story, but some days I fear that there might not be a lot to interest others.

However, after 13 years blogging that story, I feel nowhere near finished. So, the next chapter starts with a professional designer, someone who can find the potential in my archives and inspire me to share and observe and connect more and deeper.

I’m looking for a freelance Web designer to help me create the new mistersugar.com, a home for my blog, photos, links (I call them sugarcubes) and other details about life as I live it. Please contact me at anton@zuiker.com if you’d like to be the one to help me. 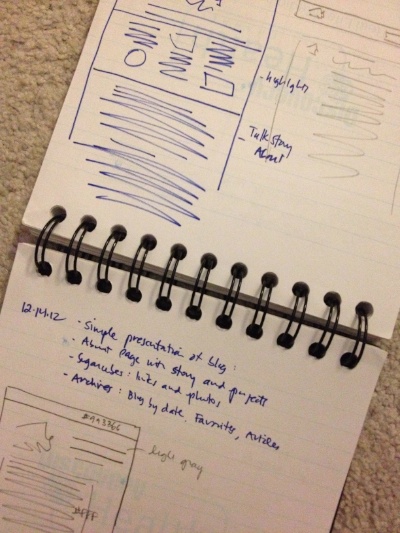