The last week has been one of the most fulfilling of my life. Here’s why:

On Tuesday, I showed up on Scripting News, the blog of blogging pioneer Dave Winer, in the post How future-safe was the first Harvard blogging site? (which also mentioned Bora, who’d just posted a thorough history of science blogging).

Dave mentioned the bike ride he and I took on Saturday, braving the morning heat to ride the Durham length of the American Tobacco Trail.

After our ride, we went for brunch and a long, relaxed chat, one of the best conversations I’ve had in a long time. At one point, Dave said, “Let’s work together.” I’m not sure I’m in Dave’s league, but I was thrilled by this, because Dave’s vision has long inspired me. Just getting the chance to talk with him was cool, and it reminded me that I had recently written about connecting with people online and then enjoying their company and conversation.

We’ve been promoting that for years with our BlogTogether events. Social media, to me, has always been best to say, “Let’s get together.” — Awareness of situational conversation (11/25/11)

Dave returned to his hotel to write the very important Twitter is a Corporate API post, and I went with the family to the pool for a birthday party.

Later that night, at a dinner with BlogTogether friends that I had organized so Dave could hear about some of the projects and interests we have here in the Triangle, I told the table that in 2005, when Dave was here for the Triangle Blogging Conference, he encouraged me to bootstrap the community, and to learn about outliners.

BlogTogether and ScienceOnline are just two of the manifestations of how together we’ve bootstrapped an community. Paul and Brian and Bora and Karyn and Cara and the other friends at the table have been amazing partners in these. We’ve got a lot to be proud of.

Outliners? In the last few months, Dave’s development of the World Outline has intrigued me. Then he posted an explainer that made it understandable to me (turns out it has a lot to do with the way I’m always making lists for myself, and rearranging and swapping the items on the lists).

I liked how Dave explained the “Let’s work together” comment to the table: it’s one of the best compliments a person can give to another. That was a keen and succinct way to describe the collaborations that we seek to facilitate, collaborations that grow out of connections and conversations. (I wrote about this in The four Cs of inspiration)

Tuesday morning, my boss handed me a letter saying I’d be getting a raise to reflect my good work. I love my job at Duke University Department of Medicine.

Tuesday night, of course, was Talk Story, which I captured in Some good storian last night. On Thursday, Talk Story showed up in the Raleigh News & Observer, in a poignant column by Burgetta Wheeler, Spoken word, handwritten letters make lasting impressions. Again, Burgetta was getting at the very heart of BlogTogether: we bootstrap online community in order to get people meeting face to face, and maybe working together to better their neighborhoods and cities and the fields in which they work.

On Friday, I showed up on the popular blog Boing Boing in the post You are your bellybutton lint. Original Tar Heel Bloggers Justin Watt and Jason Griffey alerted me to my moment of fame. The photo of my bellybutton flora was there to illustrate the article, about research led by Rob Dunn (who happened to be one of the storytellers at Talk Story).

Friday afternoon, Erin and I and the kids drove south to visit my aunt and uncle and cousins, who live on Lake Murray near Chapin, South Carolina. They took us out on the boat for two days of sun, swimming, tubing and talking. I was delighted to see quite a few osprey soaring over the waters (Frank the Beachcomber loved to make clay osprey to sit on his driftwood creations.) 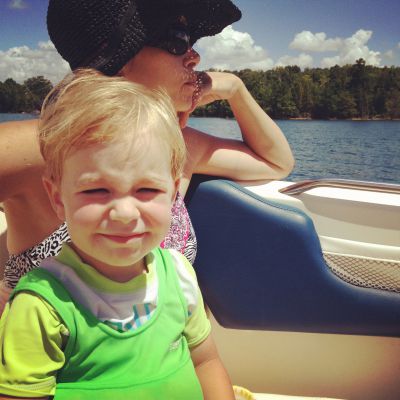 So, quite a week, blending many facets of my life: friends, family, food, work, blogging, nature and narrative.

I wonder what the week ahead has in store.