Hurricanes and cameras, and memories of Frank the Beachcomber

Last week, Erin and I and the kids jetted up to Jerusalem, Rhode Island (technically, we flew to Boston and were driven down in a swank SUV) to spend a few days in an ocean-side cottage owned by the family of Dorothy (my father’s wife of 12 years). Three of my brothers also came in, and Uncle John and Aunt Patty, too, all to share a few days with my father on the occasion of his 70th birthday (technically, Sept. 9).

That first night, I was a basket case, suffering the worst anxiety of my life. My mother was in an Altoona hospital — she was out the next day, and fine — and I was behind on the planning for an important two-day photo shoot for the department’s annual report publication. I barely slept, and I couldn’t stop fretting about impending disaster for the project.

But watching the tides go in and out the next day, I started to calm. Dad, healthy as an ox, helped by keeping us active; he took us out for a long kayak paddle up the inlet and an even longer bike ride out to a nature preserve, where he and Joel and I looked out over a pond and marveled at the lotus flowers and frogs floating on the lilies.

One day, walking along the beach with Dot, I asked about hurricanes. I shouldn’t have.

And here’s Irene tonight, as it aims dead-on for that Rhode Island cottage: 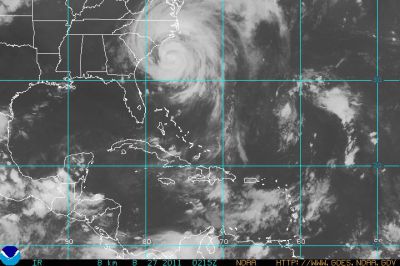 Dad is back in Hawaii, but Dot stayed at the cottage, so I’m hoping she’s getting to someplace safe! And I hope the cottage weathers the storm, because I thoroughly enjoyed my time there.

In fact, by the time we left Rhode Island (via Amtrak to Boston and Jet Blue to North Carolina), I was rested and ready to return to work and to nail down all the details necessary for the photo shoot. That shoot happened this week, and it couldn’t have gone better. Richard Corman, and extraordinary photographer from New York, spent two days crisscrossing the Duke University Medical Center with me and his crew, and he captured some fantastic images of our physicians and residents. I learned a great deal from watching Richard interact with his subjects, how he used light — mostly natural, along with some electric lighting — and how he set up and framed an image.

As I walked alongside Richard, I couldn’t help thinking about Frank the Beachcomber, my grandfather who loved photography. I know he would have loved seeing me have the chance to learn from a pro. (See the archive of Frank’s photos that my cousin, Jeff, put together when we first launched Zuiker Chronicles Online.)

Richard and the crew and I somehow missed the East Coast earthquake that struck on Tuesday. The temblor had the hospital buildings shaking, but we had just walked outside; I didn’t feel a thing move.