About the same time my fascination with Norway started, I was presented a sheep’s eyeball in seventh-grade biology class. Yet, the day I was to start dissecting the gelatinous organ, my father moved the family to the Caribbean island of St. Croix. The eyeball stayed in Idaho, and I went ahead and forgot the title of the children’s storybook, about Norwegian resistance to Nazi occupation, that sparked my interest in the snowy beauty of Scandinavia. In high school, I tried to persuade my parents to send me to Norway as an exchange student. They made me stay put in rural Illinois.

Twelve years later, I finally stepped off a plane onto Norwegian soil.

Our friend Knut Rio met me and Erin, my wife, at the Bergen airport on a dark, rainy afternoon in November.

“I hope you don’t mind,” said Knut as a greeting, “but you’ll be staying with us in our 250-year-old farmhouse on the island of Holsenoy.” Forty-five minutes north of Bergen, on Norway’s dramatic west coast, Knut’s corner of Holsenoy is a low-lying area dotted by ancient stone root cellars and buffeted by cold winds. As we pulled into a tiny gravel driveway, Knut added, “I hope you don’t mind, but we’ll be eating salmon caught this morning by my neighbor.” The next day, we would meet the retired school teacher as he pulled two more salmon from the icy waters; Knut promptly ordered them smoked for his Christmas meal.

Erin and I had met Knut, his wife Annelin, and their two daughters in the South Pacific nation of Vanuatu. Knut and Annelin, both doctoral students, were researching Melanesian kinship relations, while Erin and I were Peace Corps Volunteers organizing community education projects. Erin and Anna and Oline shared the same doctors when they all had malaria, frightening illnesses that bound our families together. Our Norway reunion was to celebrate their fully restored health.

The salmon that night was delicious. After dinner, we stayed up late, talking in the living room. My furtive glances at the wood furnace didn’t make the room any warmer, but they did remind me how comfortable my time in the tropics had been.

The next day, we returned to Bergen for a bit of culinary tradition.

“Every Thursday, Norwegians eat raspeball,” explained Annelin. “We make a big effort to hold to our traditions.” On this Thursday many of Bergen’s restaurants were beginning Christmas holiday menus, but eventually we did find one serving raspeball, a plateful of potato and barley dumplings, smoked mutton, sausage and mashed turnips. This was good, hearty food, balancing the nuttiness of the dumplings with the saltiness of the mutton and the sweetness of the turnips. A bottle of the seasoned, locally brewed Hansa Christmas ale matched perfectly.

“I hope you don’t mind,” said Knut once again – and by now I was beginning to expect his humble introduction of a memorable experience to come – “but tomorrow we’ll go to the mountains where I grew up.” Voss, he promised, would be like the snowy mountain villages I’d read about in grade school back in Idaho.

“Is there a traditional meal we can eat in Voss?” I asked.

“Yes. Without the brains, though. Voss is famous for smalahove. First we smoke it for two weeks. The we boil in it salted water for three hours.” Erin’s eyes, I noticed, were wide in astonishment.

“Is there any meat on the head?” I asked.

“Yes. Sheep spend all summer doing nothing but eating, and their jaw muscles grow big and strong.”

“Hmmm. Can we try it tomorrow?” Erin was glaring at me now.

“Sure,” said Knut, who seemed pleased to share this delicacy and his tradition.

“They eat the eyeballs, too,” Annelin offered.

I’d been dreaming of Norway for seventeen years, and Voss answered those dreams with dramatic flourish. The road to Voss passed cavernous fjords and climbed into the snowy mountains, where the sun barely showed. At Knut’s family home on the side of a wooded hill, Erin and I shared a small cabin, also heated only by a wood furnace. The toilet was an outhouse, but we were used to that from our Peace Corps service. From the cabin’s window we could look out on a mountain river valley blanketed in snow and bathed in moonlight.

Knut had taken us for a stroll in the woods in search of grouse to augment the evening’s meal, but with no luck. After a nap, Erin and I crunched up the road to the main house.

At the dinner table, Knut’s brother Ove (pronounced “oova”) apologized, through Knut’s translation, for not having any of his home brew to share. The night before, the men of Voss had gathered for their annual beer party, where they compete for the brew with the best seasonings and flavor. Ove was already preparing to make a new batch in his 400-liter pot out in the woodshed. Maybe next year he’ll fare better at the competition, he said. Meanwhile, Knut’s mother had placed before us all half a sheep’s head each.

Knut and Ove went immediately for the eyeballs, and sucked them down in one gulp. I gingerly speared my head’s eyeball with my fork. Peering at it, I wondered how my seventh-grade biology dissection would have turned out. After a nibble and a hard swallow, I put the organ back on the plate and graduated to the cheek.

“In Voss, they say that only real men eat eyeballs,’ said Annelin with a wink. 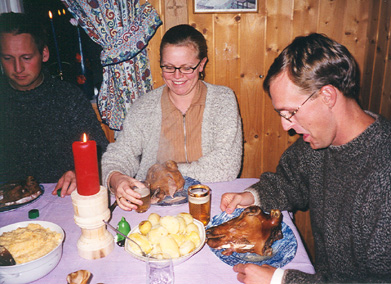 The cheek meat was, surprisingly, substantial. Terribly salty, yes, but tender and filling. By the time I was finished picking off the meat and pushing aside the skin and tongue and fat, Knut and Ove had nothing but clean, dry jaw bones on their plates. Now that’s what I call relishing tradition, I thought to myself.

After dinner, Ingrid brought out an old doll and passed it to me. This is from America, Knut explained. Ingrid’s uncle had sent it to her when she was a girl. Every Christmas after she sent her uncle a greeting card, wishing him well in America. When he died a few years ago, his will directed a check of $30,000 to Ingrid, the only relative who’d corresponded with him, the proverbial rich uncle. She’d kept her uncle’s eye from wandering too far from Norway.